What kind of group is a jury?

A jury is both a formal group and a task group.

Don't use plagiarized sources. Get your custom essay on
“ 12 Angry Men Assignment ”
Get custom paper
NEW! smart matching with writer

A formal group is a group based off of organizational structure, while a task group represents a group of individuals coming together to complete a specific task. A jury is composed to help find the task of whether the defendant is guilty or not guilty. The fact that in a task group participants can cross command relationships signifies how a jury is a task group. Even though everyone in the jury has the initial task of helping reveal the appropriate outcome for the defendant, it is not a guarantee everyone in the jury will have the same viewpoint.

Describe an instance of deindividuation and explain how it occurs.

One instance of deindividuation occurs when juror constantly announces how he believes the boy is guilty and loses his temper to where he even wants to fight when it is time for him to explain why he feels the defendant is guilty.

The real reason why he is so convinced that the defendant is guilty is not the evidence given in the trial but the fact that he is mad at his son at the time.

Is there ever a specific instance where social loafing takes place?

An example of social loafing takes place regarding juror number four once it has been revealed that juror number eight does not feel that the boy is guilty. Initially juror number four is not verbally active in the debate and places his vote off what the other jurors have said.

By the end of the film juror number four finally speaks up and states his claim of how he believes the defendant is not guilty. I personally feel that juror number four being brave and finding his voice in this room of 11 different men had a correlation to do with him changing where he stood on the case. The common thing was to let the other men talk about it and go with whatever majority of them said. His change in his standing on the defendant initially gave him an identity in the room.

Describe an incident of informational and one of normative social influence.

Juror number eight used informational social influence by making known the fact that it could not be fully proven that the boy did commit the murder based on the evidence and gave a balanced viewpoint on the situation. An example of normative social influence was when then 12 casted their vote on whether the boy was guilty of murder. Some of the jurors were hesitant on their votes strictly due to a fear of being different than the norm of voting guilty. A normative influence would be when juror number ten says that “of course he is guilty” before the vote even took place. 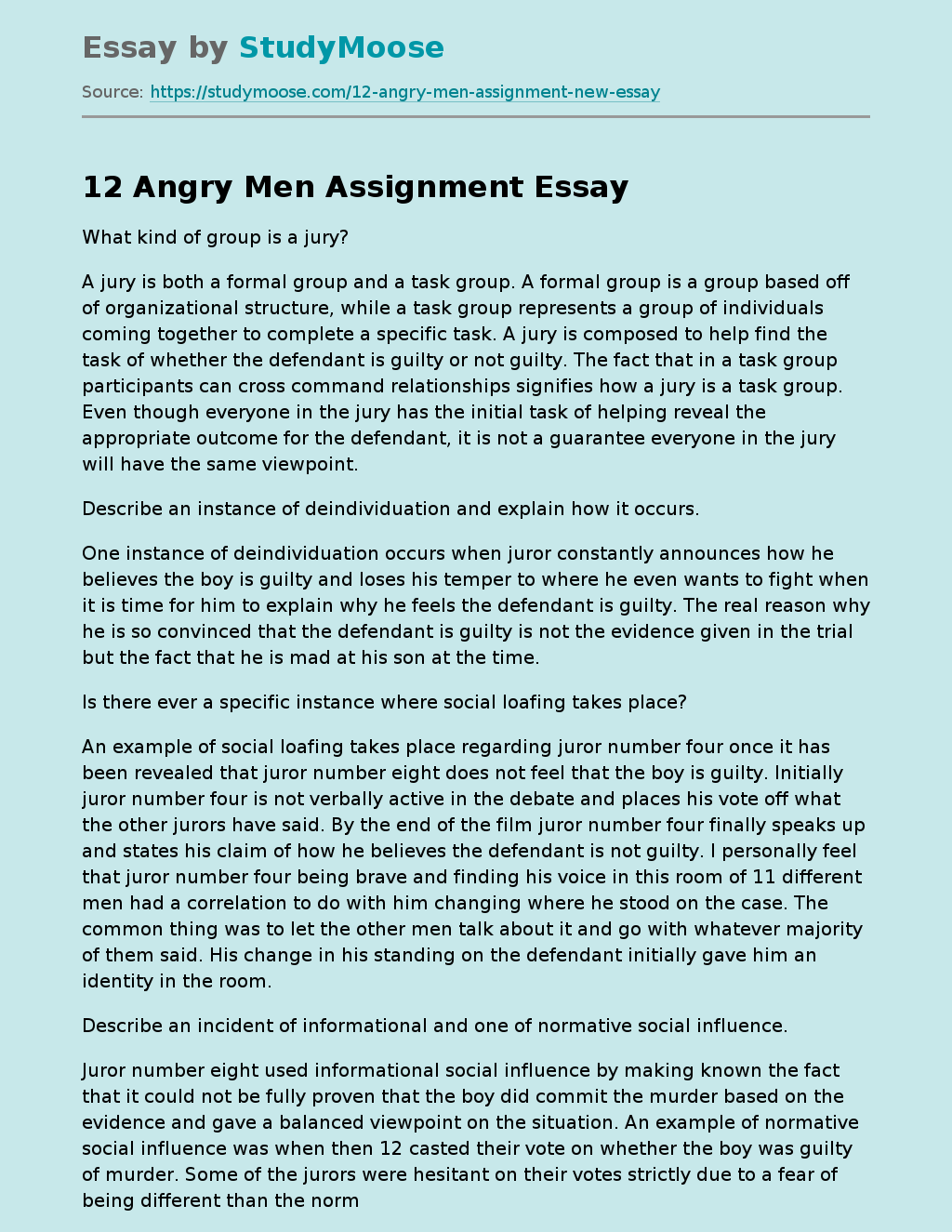