100 Strengths of Women in Solitude

Long in the history of humans, gender roles have depicted women through submissiveness and fragility, as in the emergence of the idea of marianismo in Latin America from the Spanish colonization. However, in Gabriel García Gárquez’s epic novel “One Hundred Years of Solitude,” where the Buendia family are intertwined in a cycle of solitude alongside the rise and fall of their hometown, Macondo, many women are characterized in contrast to their assumed gender roles, challenging the idea of marianismo.

Don't use plagiarized sources. Get your custom essay on
“ 100 Strengths of Women in Solitude  ”
Get custom paper
NEW! smart matching with writer

Throughout this heartfelt and tragic story, the three female characters of Úrsula Iguarán, Amaranta Ursula, and Fernanda Del Carpio are exemplified to especially be strong women with their own distinct strengths. One type of strength demonstrated by women in this story is their ability to take charge and responsibility, most associated with the character of Úrsula Iguarán.

She assumes control as the matriarch of the dividing Buendia family, and in combination with this strength, she makes sure that the Buendia family remains intact.

For example, near the beginning of the story, she takes some time to reflect on all her children, including Rebecca, Amaranta, and Arcadio and notices how much they have grown. Despite being old yet restless, “Úrsula suddenly realized that the house had become full of people, that her children were on the point of marrying and having children, and that they would be obliged to scatter for lack of space. Then she took out the money she had accumulated over long years of hard labor, made some arrangements with her customers, and undertook the enlargement of the house” (54).

Here, Ursula focuses all her effort into enlarging the house so that her children and/or the rest of the family members would not leave elsewhere due to lack of space. She clearly values her family substantially and is very attentive into retaining their bonding, seeing as though she had to take out “the money she had accumulated over long years of hard labor” to accomplish this task. In fact, she expands it so much with such vivid detail, following her decision, that it could be suggested she is not only enlarging the house for just these two generations but to encompass all the generations of the Buendia family that follow. Thus, her power in at least the domestic affairs rivals that of her husband, because it was only she who decided on such an important decision, and the patriarch of the family, José Arcadio Buendía, had no say in this. In this decision, moreover, she dictated all the new constructions of the house to her liking and what she felt benefited her family the most, further exemplifying the control over her family’s domestic affairs.

Ironically, her desire to have her family under the same roof may have unintentionally encouraged unhealthy relationships between some of her family members, including some incest, which she herself so dreaded. With such a high responsibility as the matriarch, there are bound to be detrimental consequences of her actions that she, or anyone, will have no control over. Still, she remains a vital female character in the story, clearly demonstrated by her control of the domestic affairs in the Buendia family, yet she is not the only exemplified strong female character. In a similar way, women in this story are shown to be strong through their unyielding optimism, most associated with the character of Amaranta Ursula. She sets out to restore her hometown Macondo and the Buendia household, as a result of nostalgia and love, despite it being an impossible task. Prior to the story’s resolution, she returned to the barren Macondo with her husband, who she dominates over, after spending their luxurious time in Brussel.

Thus, “A year after her return, although she had not succeeded in making any friends or giving any parties, Amaranta Ursula still believed that it was possible to rescue the community which had been singled out by misfortune. Gatson, her husband, took care not to antagonize her…” (380). Amaranta Ursula had spent a year in Macondo already, and despite how barren it is, she fully believes that she can still revive Macondo, much to Gatson’s horror. It is evident how much she loves her hometown, because of all her undertakings to liven it up, such as repairing the deteriorating household, releasing several of the finest birds she could buy into the sky of the town, and doing away with all the irritating red ants. Even when none of this works out, and the community is still “singled out by misfortune”, she is unwavered, and it is clear that this is part of the reason she is the dominant person in her relationship with Gatson. It is also the reason why she is so adamant at achieving her goals, and was such a lively figure in the media prior to arriving to Macondo, because of her belief that it would eventually be accomplished.

However, this optimism could prove to be futile, as Amaranta Ursula’s nostalgia is blinding her from acknowledging that it is practically impossible to fix the house and the town. She is therefore fixated on the past rather than focusing on the reality of the present, where she should instead use all her spirit and luxury elsewhere so it can actually benefit her and her husband. Nevertheless, her optimism underlines one of her key strengths out of many that women exhibit in this story. Lastly, strong women in this story have their own sense of stubborn pride which they abide to, most notably, the character of Fernanda Del Carpio. She displays this trait by imposing her strict ancestral customs into the Buendia family and dictating their daily life activities. Before marrying to Aureliano Segundo through unexpected circumstances, Fernanda had been raised in an insular city and had been given false beliefs of her prosperity and privilege from her family. With much ignorance of the real world and a lot of arrogance, she yearned to reform the ways of the Buendia family to her familiarity and liking.

Hence, “In spite of the visible hostility of the family, Fernanda did not give up her drive to impose the customs of her ancestors… but when she (Ursula) lost her sight and the weight of her years relegated her to a corner, the circle of rigidity begun by Fernanda from the moment she arrived finally closed completely and no one but she determined the destiny of the family” (211). Fernanda seizes the opportunity of the ever-aging Ursula, the matriarch of the family, to control all the family’s domestic affairs. This was accomplished mainly through her persistence of imposing her customs of propriety, stemming from her pride, that led a profound impact on the family, as shown by this hyperbolic statement that “no one but she determined the destiny of the family”. In doing so, it shows how strong her pride was, and how it could allow her to single-handedly dictate the Buendia family, albeit negatively, into a more aristocratic lifestyle, rather than the Buendia family controlling her lifestyle.

Similarly, having too much of pride could be a sign of a prevailing weakness in her throughout the story, as enforcing such strict practices causes her to be disconnected from the rest of the Buendia family due to their differences and the family’s distaste towards her. She is especially disconnected from her husband, who no longer loves her and is routinely outside the house partying or making love to his concubine, Petra Cotes. These three female characters of Úrsula Iguarán, Amaranta Ursula, and Fernanda Del Carpio have evidently demonstrated their unique strengths that established their prominence in the story. While Úrsula showcases her strength of taking responsibility and control of the domestic affairs as the matriarch, Amaranta Ursula displays her unwavering optimism for reviving Macondo as a strength for overcoming any obstacles and Fernanda imposes her customs, which she takes pride in, to the Buendia family as a means to show her strength over the family. Gender roles have thus inaccurately portrayed a large portion of women, who show that they could exhibit characteristics rivaling that of men. 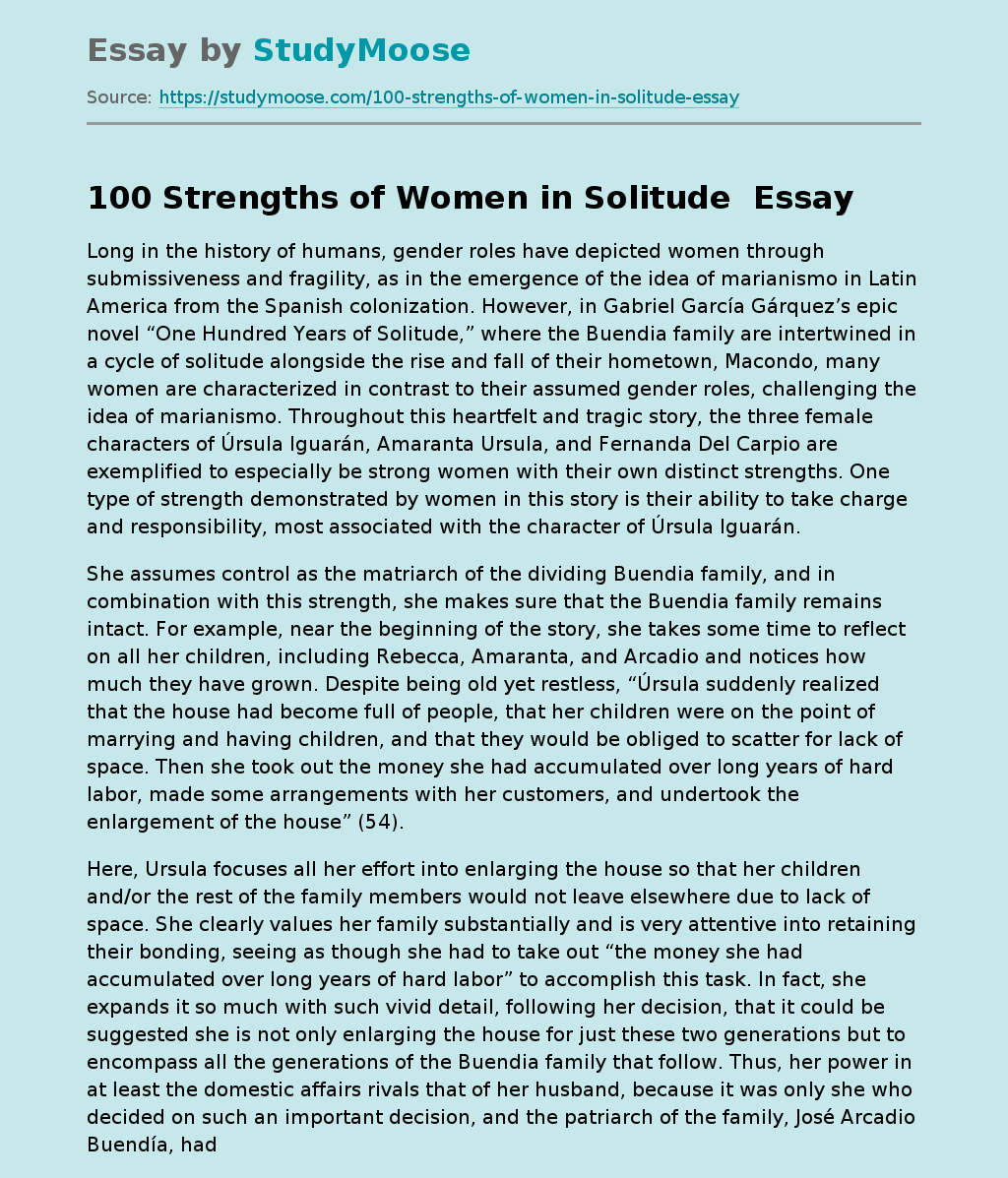