10 Things I hate about You

How Has Shakespeare’s The Taming of the Shrew been transformed for a modern audience in 10 things I hate about you? To make a modern version of a 16th century play, a perfect mixture of differences and similarities are needed, incorporating elements of both worlds. 10 Things I hate about you uses many of the characters and much of the plot from Taming of the Shrew as well as aspects of teen society that so many people can relate to in today’s world.

Don't use plagiarized sources. Get your custom essay on
“ 10 Things I hate about You ”
Get custom paper
NEW! smart matching with writer

The main characters have similar or the same names, such as Katherine, Bianca, Cameron who is Cambio/Lucentio, and Petruchio who is Patrick. These characters not only have similar names, but they also behave similarly.

In 10 Things I Hate About You, Cameron pretends to know French to be close to Bianca. In Taming of the Shrew, Lucentio disguises himself as Cambio and does the same thing, a Latin tutor. Another similarity is that Petruchio is paid to marry Katherine, where in the modern version; Patrick is paid to go out with Katherine. In the end, Patrick and Petruchio have “tamed” Katherine because she is now willing to be with a man. It can be concluded that most of the characters in the 10 Things I Hate About you were based on characters from Taming of the Shrew.

The plots of Taming of the Shrew and 10 Things I Hate About You are very similar as well.

The basic plots of Taming of the Shrew and 10 Things I Hate About You both involve multiple men wanting to be with a nice, beautiful girl named Bianca and to marry/date her, but Bianca has a mean, older sister named Katherine that no one wants to be with. In both of the stories, the father of these two girls demands that Bianca not get involved with anyone until Katherine has. The men pay one of their peers to act as if he is interested in Katherine so that they can have a chance with Bianca in both plays. In the end, Katherine ends up willingly being with the man that has been paid off, and thus “tamed. The themes from both parts are similar as well. One similar theme in both of the plays is disguise. Although Taming of the Shrew uses this theme more, there are disguises in 10 Things I Hate About You, such as when Cameron says that he is a French tutor, or when Patrick acts as though he really likes Katherine. Both the plots and the themes are similar in the two stories.

Although they seem totally alike, Taming of the Shrew and 10 Things I Hate About You have subtle differences. For example, Instead of marrying in 10 things I hate about you, they venture out for a date, this is because there a too young and in order to fit in with society, these changes are necessary. Another difference is that Petruchio and Patrick “tame” Katherine in different ways. In order to tame the “Shrew”, Petruchio starves, deprives sleep and occasionally word abuses Kate. Patrick on the other hand falls in love with her and persistently tries to be nice to her. Both methods worked, but Petruchio’s method would have been unacceptable in today’s society as women have the same rights as men. There were not any major differences between the two stories, but there were some necessary differences to be made to fit the time period.

Taming of the Shrew and 10 Things I Hate About You had many similarities, but it also had many differences. The differences that were made were definitely necessary to fit today’s society and to fit the genre of both plays, but they didn’t change the plot dramatically that it a new story is created. The modern adaption of Taming of the Shrew was changed enough to keep many of the main themes, characters, and the main plot, but different enough to fit modern society. 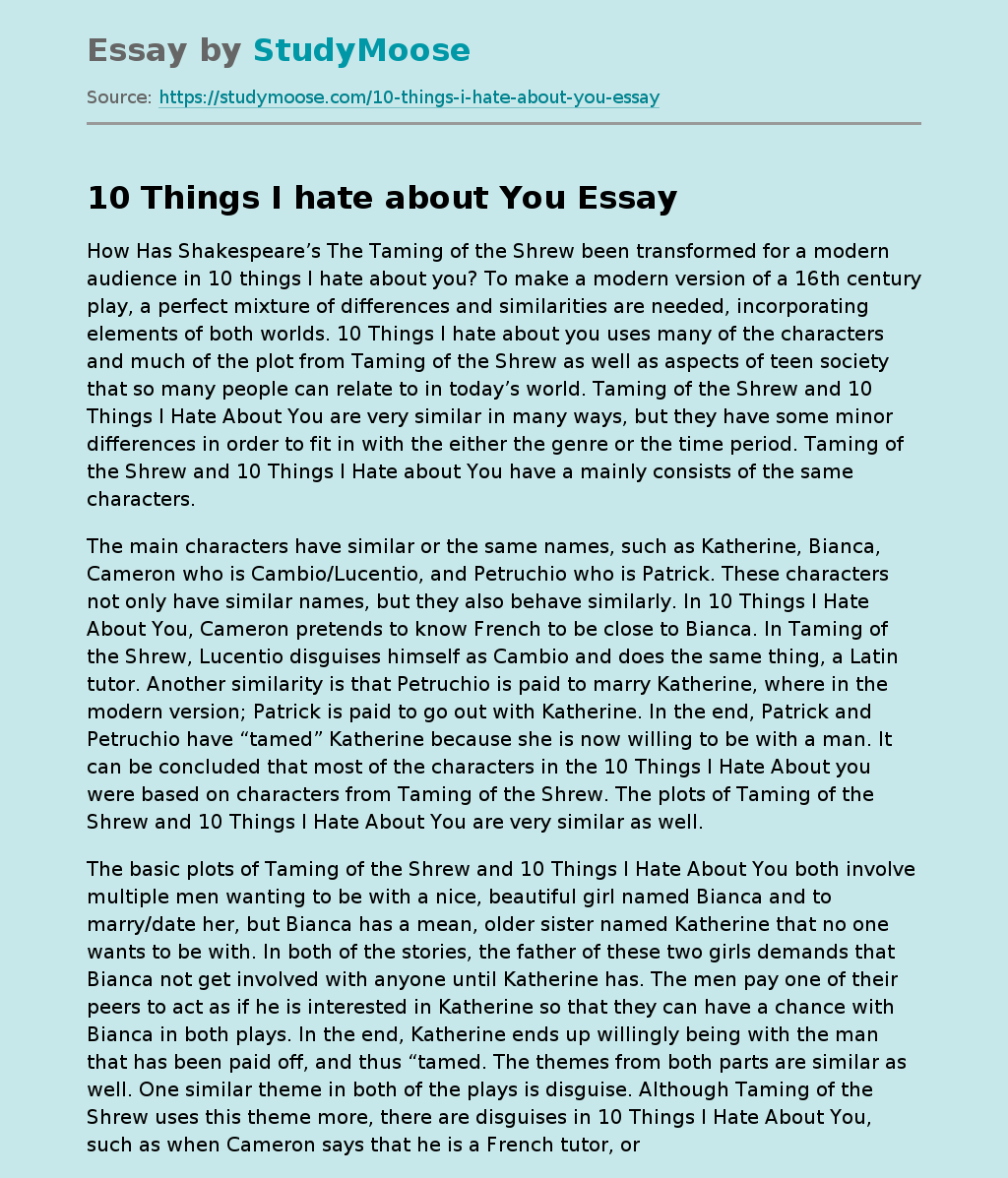