For Muslims he was one of the best leaders of all time, Muhammad led to the spread of Islam in Saudi Arabia. Because of his contribution to expanding Islam it has become one of the largest and the quickest growing religions on earth today. He led his followers to several migrations and successful wins in battles against armies much greater than theirs. His greatest leadership traits which would make a remarkable team leader are his courage, leading by example, motivational approach, persistence and decision-making.

Don't use plagiarized sources. Get your custom essay on
“ 10 Famous Leaders ”
Get custom paper
NEW! smart matching with writer

Mahatma Gandhi was a young man with a willpower to excel at what he did. He completed studying law from London and became the most crucial part of the Indian freedom struggle against the colonial rule. Because of his protest during civil disobedience he eventually succeeded when he led his country to freedom in 1947. His main characteristics were strength, wisdom, people-skills, motivational approach and leading by example. These skills are key when working with a team as a team leader.

Nelson Mandela was the first South African president voted in fully democratic elections. Mandela was also the main person in the anti-apartheid movements in the country and served a long prison sentence because of the same. This did not stop Mandela and in fact motivated him to dedicate his life to bring together his country and he successfully managed to do so after his release from a 30-year prison sentence. His main characteristics were his willpower, dedication and focus. For a leader these are a few key skills needed to succeed.

Julius Caesar was one of the greatest military leaders of all time, Caesar was also one of the best political leaders the world had seen. He led several campaigns with several victories and was single handedly responsible for the expansion of the Roman Empire. He was also responsible for reforming the Roman government and he was also the beginning to a great empire. His greatest traits for being a successful leader were his decisiveness, boldness, eagerness, motivation and strategic planning.

Winston Churchill was the Prime Minister of Britain from 1940 to 1945, Churchill led Great Britain against the Nazi Germany during the World War II. He teamed up with allies and therefore led to the defeat and downfall of Hitler. His time as the British Prime Minister was in a time of fear and destruction caused by Hitler and his allies. Churchill was known for his fearlessness, determination, perseverance and devotion to his goal. For a business leader these traits would help the team exceed their goal and reach success.

Adolf Hitler was hated through the world but was one of the greatest leaders of all time. After becoming the chancellor of Germany in 1933, he was responsible for one of the greatest economic and military growths the world has ever seen. He successfully invaded more than 10 countries with his brilliant strategy and planning. His skills for being a success leader were propaganda and planning which made him a great leader.

Abraham Lincoln was the 16th president of the United States and is also one of the most well-known leaders of all time. From his office he kept the people together during the American Civil War and is the only reason that the nation did not break into smaller parts. He also ended slavery in the US by signing the Emancipation Proclamation. His greatest traits for a leader were his determination, persistence, beliefs and courage.

Martin Luther King Jr who was born January 15, 1929 was an American Baptist minister and activist who was a leader in the African American Civil Rights Movement. He is best known for the role of his nonviolent civil disobedience based on his Christian beliefs in the civil rights movement. His main characteristics were resilience, knowledge, motivational approach and leading by example. These skills made him successful and if they were used today by a business leader it will help the business develop and grow.

George Washington, who was known as the founding father of the United States of America. He was the leader of the American Revolution and the first president of US. He was a true visionary whose dream lasted over 200 years. What made Washington great as a leader was his foresight, vision, strategic planning and his ability to lead people to success.

Albert Einstein is possibly the most famous scientist of the 20th century. Albert Einstein had a great impact on the understanding of the universe, including basic concepts such as time, light and gravity. To this day, his work is still being used to guide physicists. His traits of strategy, creativity and intelligence made him the leader he was to this day to many people. 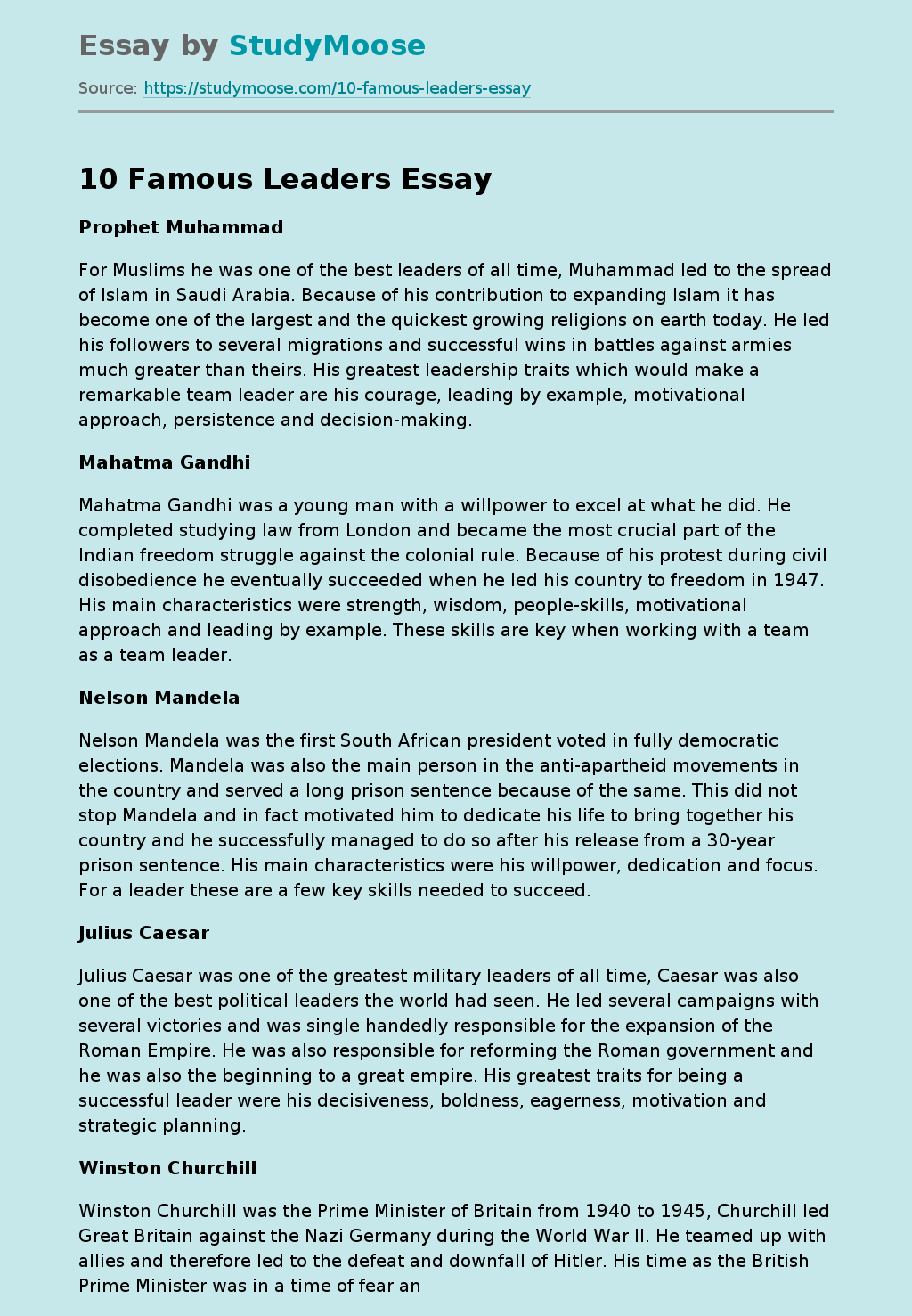