The construction of the US-Mexico border wall is a classic example of Presser’s cultural grounds of mass harm, legitimizing and ingraining the hate and disdain of immigrants coming to the United States.

Not only had Trump claimed the illegal immigration from Mexico a national emergency at the border, he, along with the Pentagon’s Acting Defense Secretary Shanahan see the wall as a solution to the issue of illegal immigration (Singman and Tomlinson). This has led to the discrimination of Hispanics, whether they immigrated, legally or illegally, or were born in the United States.

The plot of these two narratives, of the construction of the border wall between the US and Mexico, is moralizing the experience of why the wall is being built. It’s assigning blame to immigrants, specifically from Mexico. Both sources are part of a multitude of narratives that draw distinctions between different parties. These distinctions draw distance between the two, thereby creating the self and other (Presser 70,71).

Trump and Acting Defense Secretary Shanahan are drawing a distinction between Americans and immigrants. Americans are being viewed as the self, who share similarities and therefore we should only care about ourselves and deal with the problem. The other is seen as the problem that must be dealt with, and not as our compatriots. There is no acknowledgment of any immigrants in either of the pieces. Only the video excerpt from CNN shows Trump refers to illegal immigrants as ‘the other’ who will come across the border, shoot up the United States and call it home (Browne and Crawford).

Both sources are giving credit to the Pentagon, specifically to Defense Secretary Shanahan.

Presser discusses how Kelman’s social processes of authorization, routinization, and dehumanization weaken our moral restraints and therefore we have certain definitions of situations, certain peoples, and ourselves versus the target (32,33). The Pentagon uses its authority to ensure loyalty and delegitimize any contradictory ideas. CNN is more a more liberal source, that has two points of view of the allocation of funds. They revealed that Congress challenged the Pentagon’s authority and impulsive behavior of making decisions without everyone’s consent, and potentially at the expense of the military’s readiness. CNN authors Browne and Crawford entered a quote from 10 members of Democratic senators, in which they state that: ‘The Department of Defense has ignored decades of precedent and cooperation with the Congress in carrying out a transfer of funds without regard to any consultation with the Appropriations Committee.” Fox news essentially disregards the Congress’ objection in the decision of allocating additional money by diverting it from other accounts. Fox is very one-sided towards Republicans, which could explain why Shanahan is praised and gets a lot of attention in the article. Routinization strips the acknowledgment that the victim, in this case, the illegal immigrants that cross the border, of their humanity. It minimizes the number of decisions to be made and focuses on the details of the job, thereby nearly eliminating our morality (Presser 33). Both CNN and Fox news note how the Pentagon uses the term “reprogram” throughout their pieces and is used continuously throughout the articles. The actors don’t think about their ethics in their actions, and therefore are trying to not claim responsibility, but merely praise (Presser 33). Fox shows Acting Defense Secretary Shanahan receiving praise from President Trump and notes his presidential nomination to be the permanent US defense secretary for the term.

Narratives are used to create a common sense, a baseline, that is subject to change and reinterpretation, by using suspense, curiosity, and surprise. The suspense and uncertainty in the plot are important it gets our attention and keeps us absorbed in the story. We know that the wall is being built, but what is going to happen next? What is the next thing that is going to prevent further immigration? The use of language, including figures of speech pulls the audience further into the story, increasing emotional engagement (Presser 74). CNN uses language by Democratic Senator Dick Durban to show how valued the construction of the wall is to the Republican party, despite the numerous investments the Republicans have moved for the construction of their precious wall. Pro-Republican Fox notes that President Trump calls the issue “a national emergency at the border,” ensuring that the Pentagon is “fully engaged” in the crisis of illegal immigration (Singman and Tomlinson). Both CNN and Fox use quotes from Shanahan, in which he continuously uses the words: committed and reprogram. The implementation of ambiguity increases the effectiveness because people can make the story their own by filling in the gaps themselves, by using their imagination and previous experiences (Presser 80). Both articles are open-ended and bring up different questions regarding how the United States will deal with immigration and how to monitor it in the future. Different people have different opinions on how and where the funds of the United States should be implemented. Fox News quotes Shanahan saying that, if he does become Defense Secretary of State, he “will continue the aggressive implementation of our National Defense Strategy…committed to modernizing the force …to keep our military lethal and our country safe” (Singman and Tomlinson). The word “aggressive” can mean anything, and we can see it possibly lead to something sinister that aligns with Arendt’s “banality of evil” thesis, as did the Nazi regime (Presser 33). The connections an immigrant makes is going to be different from a non-immigrant or a prideful patriotic American. Different individuals have different experiences and how they connect their experiences to the narrative of the construction of the border wall is going to vary along the spectrum.

The construction of the border wall is going to further divide the United States from other countries, as well as increase encultured discrimination within our own borders. The border wall is a Grand Social Experiment, used as a means to an end. Will it work, or just lead to more punitive measures, as does criminal justice? Either way, it shows America is pulling away from their roots. America is a melting pot that was built on immigration. The border wall is eliminating the American Dream from an ethnicity, possibly becoming the first step to major isolation from other countries and the exclusion of immigrants worldwide, further enculturing discrimination within the United States. 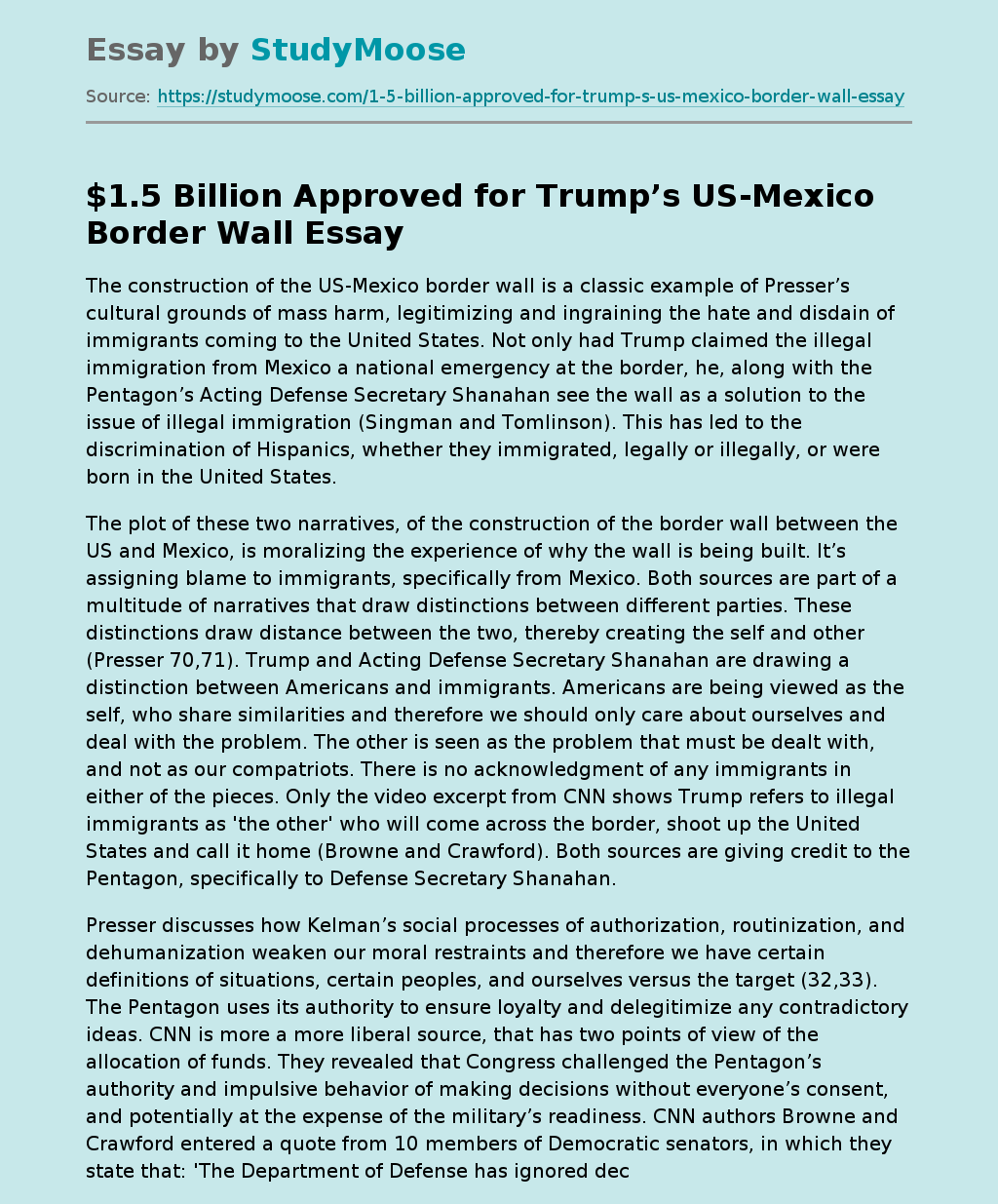